As residents across Houston continue the clean-up following Hurricane Harvey, leaders at the local, state and national levels are looking to next steps that will enhance the region’s hurricane and flood resiliency.

The Houston-Galveston region has been and will continue to be vulnerable to the joint flood hazards that come with tropical cyclones near the Gulf Coast, explains Dr. Jacob Torres, senior project engineer with Lockwood, Andrews & Newnam. The firm is working with Rice University’s Severe Storm Prediction, Education and Evacuation from Disasters (SSPEED) Center.

In the weeks following Harvey, Houston Mayor Sylvester Turner voiced his support of the Coastal Spine, or Ike Dike. The measure was conceived by Bill Merrell at Texas A&M Galveston in 2009 to protect the Houston-Galveston area from storm surge. The 70-mile, 17-ft-high coastal barrier would cost an estimated $4 billion to $8 billion, but there are no plans to build it. Texas General Land Office Commissioner George P. Bush wrote the White House in April, asking for $15 billion to build a coastal spine system. No response yet, he says.

Researchers at the SSPEED Center also have proposed the Mid-Bay Strategy (MBS), which could work in tandem with the Coastal Spine. It incorporates elements of localized protection and the vulnerable, shrinking coastline with structural barrier systems placed across major tidal inlets and barrier islands. It also includes measures such as wetland restoration and a gate structure across the Houston Ship Channel.

“Modeling of the MBS has shown the Houston Ship Channel and the highly populated west Galveston Bay can be protected from hurricane storm surge, while the immediate upstream portion of the protected MBS side can behave as a retention pond for storing hurricane rainfall-runoff,” Torres explains.

The MBS is still being studied, and an environmental impact study is now underway. Projects under the scope of the MBS are expected to cost about $3 billion but wouldn’t begin construction for at least five years. 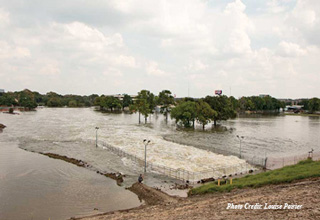