In 2008, Hurricane Ike struck the upper Texas coast, inflicting serious damage to the greater Houston-Galveston area and Galveston Bay. One of the facilities impacted was the Port of Houston Authority’s cruise terminal, recently completed and situated along the Galveston Bay shoreline. In addition to minor damage to the building and dock area, significant erosion occurred along and west of the bulkhead fronting the Bayport Ship Channel, and along the Galveston Bay shoreline south of the terminal building. LAN assisted the PHA in inspecting and documenting damage for all facilities, and was then engaged to survey and assess the degree of erosion and damage to the coastal interface. Topographic and hydrographic surveys were performed and compared to pre-storm record drawing information.  Once the degree of erosion and damage was fully determined, LAN prepared design documents for the reshaping of the shoreline south of the terminal and repair of shoreline protection with the placement of rock riprap for a distance of 800 feet. Additionally, design improvements were provided for severely eroded shoreline along the Bayport Ship Channel which included damage to the outlet and overflow for a temporary water quality pond, 100 feet of channel frontage, and severe erosion around the Cruise Terminal bulkhead, which had exposed portions of the tie-back wall tie rods. All repairs were completed on an emergency basis.

800 LF of shoreline repair and protection 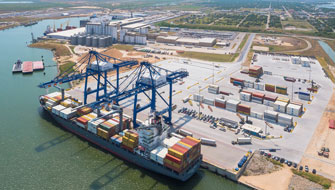