Caltrain serves 32 stations along the 77-mile corridor, running approximately 90 weekday trains, including baby bullet, limited, and local trains. As part of Caltrain’s modernization effort, the Joint Powers Board is implementing a capital program consisting of a series of construction projects. The capital program will support Caltrain’s ultimate goal of providing electrified service from San Francisco to Gilroy.

Some of the projects under the capital program include grade separations (raising the tracks and slightly lowering the road), station upgrades, bridge replacements, crossings improvements, and other infrastructure along the corridor. Over the next five years, LAN will serve as a sub-consultant to MNS Engineers on these projects. As part of the MNS Engineers team, LAN will provide resident construction managers, constructability reviews, quality assurance, and construction observation services.

“These improvements will enhance safety for motorists and pedestrians, reduce local traffic congestion, and provide better connectivity and amenities for Caltrain commuters,” said Timothy Schmidt, LAN’s California Transit Director. “We are looking forward to working with the Joint Powers Board and MNS Engineers to implement these improvements.” 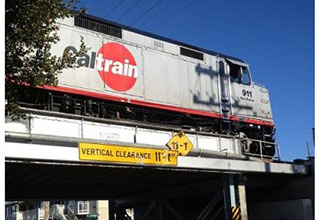