The first phase of a Clear Lake City flood-mitigation project is complete, and construction on the second phase will begin soon.

Exploration Green — which is redeveloping a roughly 200-acre golf course — finished the first of five detention ponds and park area in March, a spokesperson for the project said. To celebrate, a grand opening event will be held April 28 from 10 a.m. to 2 p.m., according to the project’s website. Above, check out photos of the project.

“The purpose (of the event) is to encourage the public to come see how the project protects (the surrounding area) from flooding and provides new green space for the public,” said John Branch, the board president of Clear Lake City Water Authority, one of the major partners in the project.

The first pond protected at least 150 homes from flooding during Hurricane Harvey — and it was only about 80 percent complete at the time. When all five phases are finished, Exploration Green is expected to protect between 2,000 and 3,000 homes near the floodplains by Horsepen Bayou.

Construction for the first phase began in 2016, and the excavation and construction for that phase cost around $6 million, Branch said. It includes a main entrance, parking lot, sports field, beaches and more.

Construction on the second phase should begin at the end of April, Branch said. The entirety of Exploration Green is expected to be finished by 2021. 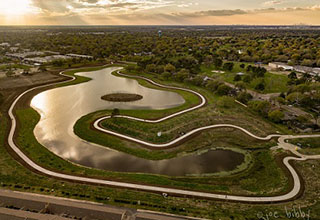