In one of the epicenters of damage from Houston’s 2016 Tax Day flood, planners have drafted a list of specific improvements they hope to have funded by federal money slated for allocation this summer.

The North Houston District, formerly the Greenspoint District, commissioned among the most advanced hydrological study yet conducted in Houston after floods last spring forced area residents to evacuate apartment complexes floating in canoes, air mattresses and even a refrigerator.

The district is now citing that $75,000 study as it vies for its share of federal flood money that will be allocated throughout Harris County in June or July.

“Through this study we think we have some good projects to spend that money on,” said Robert Fiederlein, vice president at the North Houston District. “We have a pretty good idea of what needs to be done. Now it’s the political battle to secure the funding.”

It took an exhaustive analysis from a high-powered computer to attain that insight. Just like the advent of LIDAR revolutionized drainage understanding almost two decades ago, new computing power allows engineers to model how water flows over the complex surface of the land, instead of simply modeling how it enters and moves through the system of drainage pipes.

“Advances in technology have allowed us to now do this type of analysis,” said Derek St. John, an engineer with Lockwood Andrews and Newnam and the principal author of the study. “We can evaluate the complete drainage system and understand where they’re experiencing flooding.” 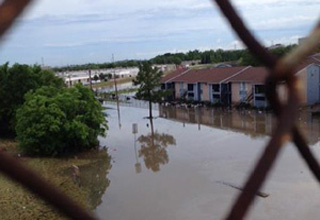