Greg Hall Jr. is used to riding out storms. He has done it many times in his 15 years as superintendent of the city of Conroe, Texas’ wastewater treatment plant, often staying on site for anywhere from four to six days at a time. He did so during the “Tax-Day Flood” in 2016 and did not have any reason to suspect anything would be different during Hurricane Harvey. So on Aug. 25, 2017, Hall was prepared to ride it out. He and his crew stocked up on supplies and settled in. What was not immediately apparent, however, was the magnitude of the storm and the resulting damage to the plant.

The plant itself is located in a berm 100 yards from the San Jacinto River. A 10-ft levee surrounds the plant, which has the capacity to treat 12 million gal of wastewater daily and is the sole plant currently serving the city of Conroe–a community north of Houston comprised of more than 82,000 people. Conroe also was the fastest-growing city in America in 2017, according to the U.S. Census Bureau. Originally built in 1972, the plant is a conventional activated sludge plant that was expanded and rehabilitated two years ago by Lockwood, Andrews and Newnam Inc. (LAN), a planning, engineering and program management firm based in Houston. 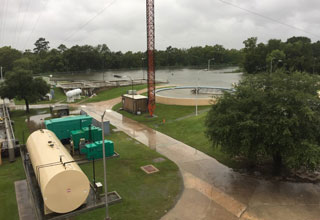