Getting the Gunk out of Wastewater Treatment Plants (Source: Public Works)

Located in the heart of central Texas is the growing City of Killeen. Lured by cheap land and a strong economy, people moving in from other states could drive population up 36% over the next two decades to nearly 200,000.

The Bell County Water Control Improvement District No. 1 treats sewage generated by this growing population via two plants: a 21 mgd central plant and a 6 mgd south plant (maximum capacities). Both were meant to treat primarily residential sewage, but as the city’s southern corridor grew so have the number of restaurants.

Wastewater treatment plants are designed around three metrics: flow, load, and effluent quality. At 3 mgd, flow to the south plant was well under maximum treatment capacity in 2013. However, declining dissolved oxygen (DO) levels in the fill-and-draw sequencing batch reactor activated sludge system made operators suspect that loads into the plant were above design levels. They were correct: The plant had been receiving higher-than-anticipated loads since it began operating in 2007.

Further investigation indicated high levels of fat, oil, and grease (FOG) in the wastewater. FOG is the byproduct of feeding humans: bacon grease, meat fat, oil, shortening, butter, margarine, sauces, dairy products, etc. Lipids can be washed down the drain with hot water, but they solidify and stick to the inside of sewer pipes when they cool. Given enough time, they completely clog the pipe. If they get to the treatment plant, they create issues like lower DO levels.

FOG is common in residential wastewater, but the high concentrations coming into the south plant indicated more restaurants were discharging into the city’s sewer collection system. The materials tend to collect anywhere water is quiet enough to allow them to separate from the water and float to the surface. After observing a large buildup in the district’s influent lift station, plant operators began routine cleaning and maintenance. Despite their efforts, FOG continued to collect in other locations around the treatment plant.

Restaurants keep grease from entering the collection system via a trap that allows dishwasher water to cool so fat, oil, and grease floats to the surface. They’re supposed to regularly remove this material. The district doesn’t own the city’s collection system, so it couldn’t require them to do so.

That left another option: modifying the plant to cost-effectively manage the higher loads. District managers hired the Waco, Texas, office of planning, engineering, and program management firm Lockwood, Andrews & Newnam Inc. (LAN) to explore the issue and make recommendations. Together, they devised an unconventional but effective solution to a problem common to wastewater treatment plants nationwide. 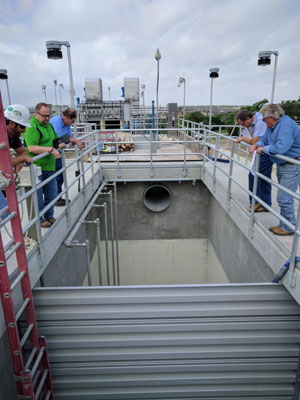