The district and the surrounding community are growing fast — Tomball ISD estimates that student enrollment will increase to 19,500 students by 2021, up from 16,000 in the 2018-19 school year. The $275 million bond was passed in 2017 to reflect that growth.

Grand Oaks Elementary School, which replaces Wildwood and Lakewood Elementary Schools, will be 112,186 square feet over one story. It can accommodate 900 students, from kindergarten to fourth grade. Houston-based PBK Architects was the architect, and Rhode Island-based Gilbane Building Co., which has a Houston office, was the contractor. The $24 million elementary school is part of the master-planned Elmer and Dorothy Beckendorf Educational Complex.

Meanwhile, an unnamed agricultural science project center on the Tomball High School campus will feature a usable barn. It will also feature a nature center and two 900-square-foot classrooms. It will cost $4.7 million. It was designed by Fort Worth-based VLK Architects, which has a Houston office. Houston-based Sterling Structures is the general contractor. 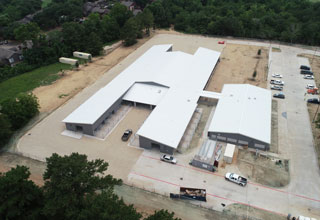