The Federal Emergency Management Agency recently posted a social media video on the Exploration Green project, showcasing it as a national model for flood control.

Exploration Green, which is being built in five phases, will encompass five massive detention ponds that can each hold approximately 100 million gallons of water – the equivalent of 750 Olympic-sized swimming pools. The project, which receives runoff from a drainage area of approximately 2,400 acres, is designed for a 100-year storm event. In addition, Exploration Green will also serve as a nature park comprising 105 acres of natural habitat with wetlands and native grass land areas, 12 miles of hike-and-bike trails, two athletic fields and other amenities.

In August 2017, Hurricane Harvey dumped an estimated 45 inches of rainfall on the Clear Lake area and even more in some surrounding neighborhoods – an unparalleled event for rainfall intensity and duration. Although only 80 percent of the Phase 1 pond was excavated at the time of the hurricane, it helped detain 100 million gallons of water, protecting at least 150 homes from flooding. Ultimately, Exploration Green will hold 500 million gallons of water and more than 2,000 homes will be protected.

Situated in the center of the Clear Lake community, this project also provides easy green space and trail access for strolling, walking, jogging, or biking. Nearly 70 percent of the 40,000 people living in the direct Clear Lake area will be within walking distance of Exploration Green, and the remaining 30 percent will be less than a mile from one of the sections. Additionally, the wetlands and native trees, grasses, and wildflowers have provided an attractive habitat for fish, birds and other wildlife. iNaturalist reports indicate that nearly 400 species of birds, plants, insects, and reptiles have been verified at Exploration Green. 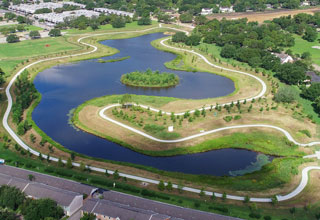