Eyes in the Sky, Boots on the Ground (Source: Civil + Structural Engineer)

By Natasha Lombard and William Byland

As the popularity of unmanned aerial vehicles (UAV) skyrocket, so does their use in the engineering and construction industries. In recent years, the City of Houston has started using UAVs for its drinking water distribution system projects. Houston’s largest ever water infrastructure project, a series of 120-inch and 108-inch water lines collectively called the Northeast Transmission Line (NETL), is currently under construction. What better way to document the extensive, 16.5-mile project than from the air?

All thirteen segments of the NETL are in the construction phase, with four at substantial completion. With drone videos and aerial photographs, the City has a detailed month by month documentation of the project, and the technicalities of the construction progress are forever preserved.

The City has also employed drones on several other large diameter water line projects under construction, including a 72-inch that will weave its way through Houston’s Downtown and Midtown Districts, and on condition assessment projects of existing facilities. Drones are being used to capture preconstruction conditions, track construction progress, and document milestones along the way in these large projects. 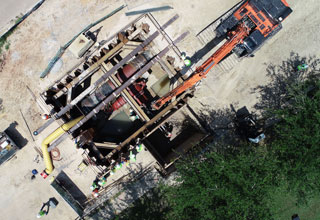