A new 54-in. water line will move up to 75 million gallons per day of surface water from the Southeast Water Purification Plant to the city of Houston as well as seven cities and water authorities when the line is completed in 2025.

The seven partners include the League City/Gulf Coast Water Authority, Clear Lake City Water Authority, Baybrook Municipal Utility District (MUD) No. 1, Harris County MUD No. 55 and the cities of Webster, Friendswood and Pasadena. Approximately 10 MGD of water will be distributed to the city of Houston’s customers, while its partners will receive 65 MGD of water.

“Typically, for the city of Houston, as the regional treated water provider, they tend to be the one who owns the infrastructure, and they are providing service to other entities outside the city limits or a water system,” says Melissa Mack, vice president and principal at Lockwood, Andrews & Newnam Inc. (LAN). She leads the technical adviser team for the Southeast Transmission Line (SETL) project, which is being delivered via design-bid-build.

“For this project, the city has ventured off into having more of a partnership where there are several owners coming together,” Mack says.

What exists now is an approximately 50-year-old, 42-in., 9-mile line along Highway 3 in Webster near Ellington Field, Mack explains. “The line has had a lot of leaks on it, and they spend a lot of time repairing leaks. It’s a major and a main source of supply, so it’s very difficult to isolate the line.”

YOU CAN ALSO READ THE STORY HERE (Story on Page 46. Subscription to Houston Business Journal Required) 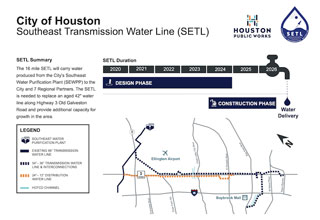