After nearly 30 years, the MoPac Expressway intersections at Slaughter Lane and La Crosse Avenue in southwest Austin were in desperate need of an update. They were built in 1992, and since then the city’s population has nearly doubled, as has the traffic that travels MoPac daily. An estimated 21,000 cars traversed MoPac every day in 2010, and that figure is projected to reach 66,700 by 2030.

“The project was needed because there’s not enough capacity, and so there were major backups in peak hours,” explains Bob Austin, vice president with Lockwood, Andrews & Newnam Inc. (LAN), design engineer on the project.

In 2013, the Central Texas Regional Mobility Authority and the Texas Dept. of Transportation conducted an environmental study to determine the best options to reduce travel times and enhance safety at both intersections. TxDOT decided to construct underpasses at Slaughter Lane and La Crosse Avenue and relocate the MoPac main lanes under these two intersections. The main lanes, two in each direction, would be built inside the existing MoPac lanes, while the existing MoPac lanes would be rebuilt and serve as ramps to carry main lane traffic to Slaughter and La Crosse.

“So this project will not only add capacity, but it will also increase safety and it eliminates a lot of turning conflicts with a DDI at Slaughter. It will really help move the traffic safely,” Austin says.

TxDOT selected LAN in 2014 as the lead design engineer; the firm is also providing construction phase services. In August 2017, the $53.5-million design-bid-build project was awarded to general contractor Webber LLC. Construction began in January 2018 and is scheduled for completion in 2021. 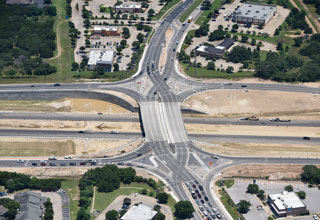