By Will Chandler, P.E.

Founded in 1870, the city of Copperas Cove is located in Central Texas, roughly 70 miles southwest of Waco. Copperas Cove is primarily a residential community for the 30,000 people that call it home, but it also accommodates a burgeoning commercial center that services residents of the greater Coryell County, including the military troops stationed at neighboring Fort Hood. The city owns and operates three wastewater treatment plants—the Northwest, South and Northeast wastewater treatment plants—and treats sewage generated from Coryell County within the city limits.

The Northwest Wastewater Treatment Plant is the largest of the city’s three facilities with a permitted average discharge of 4 million gal per day (gpd). The Northwest plant was originally constructed in 1976 as an oxidation ditch process with two secondary clarifiers and a chlorine disinfection system. In 1989, the plant capacity was expanded with the construction of two aeration basins, two new secondary clarifiers, and an aerobic digester for operation as a conventional activated sludge process. The aeration and digester basins were equipped with coarse-bubble diffusers positioned on vertical draft tubes, which were mounted off of header pipes spanning each basin. The aeration system was fed by three 200-hp multistage centrifugal blowers, which were configured to run on manual timers that operators would set to maintain dissolved oxygen levels. In 2003, a coarse bar screen was installed to filter plant influent sewage, and the coarse-bubble diffusers were replaced by fine-bubble diffusers.

Unfortunately, the 2003 improvements did not alleviate existing operational issues. Even with coarse screening up front, rags and debris would easily make it through to the process tanks and inevitably accumulated on the air-drops and diffusers. On top of the ragging, impacts from larger debris and fouling of the fine-bubble diffuser orifices incurred damage such that only an estimated 85% of the diffusers were operational after only a few years of service. Between the reduced number of available diffusers, the inefficient blower equipment and the imprecise aeration control scheme, controlling effluent quality was a challenge and operation costs were high. 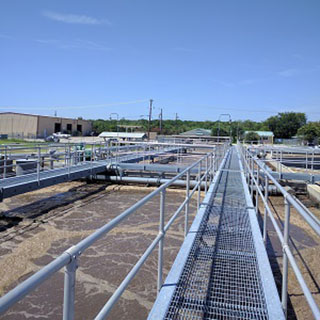