Cruise Terminal Expansion at the Port of Galveston (Source: STRUCTURE)

The Port of Galveston has served as a hub for the cruise industry since the early 1990s and ranks as one of the busiest cruise ports in the U.S. Its facilities handle more than one million cruise passengers each year. When the industry demanded increased terminal capacity and throughput, the Port was quick to oblige. However, could consulting engineers with Horner & Wyatt in Kansas City, Missouri, who were responsible for the design of a grain elevator complex for the Galveston Wharf Company in 1930, have possibly envisioned their part in accommodating the Port’s expansion of Terminal 2?

For nearly seven decades, the grain elevator played a pivotal role in Galveston. Operations of the grain elevator commenced in 1931 and continued until 1998. Three “banks” of silos with a storage capacity of 5.2 million bushels enabled Galveston to be among the nation’s largest exporters of cotton, flour, sulfur, fertilizer, chemicals and grain while the Wharf Company operated. The 168 reinforced concrete silos, each 20 feet in diameter and over 100 feet tall, were supported on 40-inch thick reinforced concrete mat slabs and more than 12,000 thirty-foot long timber piles spaced at 30-inches on center, each way. Figure 1 illustrates an elevation view of one of the original grain elevators.

In June 2003, the abandoned grain elevator site made way for the Port’s $30 million cruise terminal expansion plan with the demolition of the elevator, railcar unloading facilities and offices, and the implosion of the 236-foot tall “head house.” The mat slabs were abandoned in place.

In 2013, Royal Caribbean Cruises, Ltd., announced its desire to operate one of its Freedom-Class vessels, the MS Liberty of the Seas®, from the hub port at Galveston. The Liberty of the Seas has a length of 1,112 feet, a beam of 184 feet, a height of 209 feet above the waterline, a draft of 28 feet, an average crew size of 1,300, and fifteen passenger decks accommodating as many as 4,370 passengers. 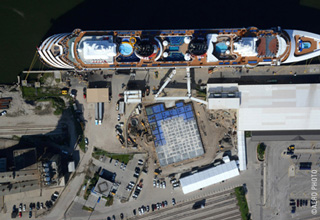