Founded as a sugar plantation in the early 20th century and incorporated in 1959, the City of Sugar Land is the economic center of Fort Bend County in Texas. In the early 1970s, as the city expanded, a new subdivision development called Covington Woods was constructed. Over the next few decades, Sugar Land continued its rapid residential and commercial growth, becoming one of the most affluent cities in the state. Between 2000 and 2010, the city grew a whopping 158 percent, according to census data.

As a result, the Covington Woods region is mostly developed with very little open property. Every year, the region is hit by intense thunderstorms with an annual rainfall of approximately 50 inches. Additionally, the drainage infrastructure was developed prior to current development criteria and is in need of updating. With an almost entirely flat topography, the region has historically faced drainage problems due to varying storm sewer capacity issues and inadequate overland sheet flow paths.

Over the last decade, forward-thinking leaders at the city have been making substantial progress to reduce these flooding issues. In 2007, the city adopted its first Master Drainage Plan (MDP) that established criteria for evaluating, scoring and ranking drainage problems. From 2009 to 2011, the city proceeded to develop its integrated stormwater management model utilizing GIS and LIDAR data and InfoWorks to generate a high-level, city-wide model that would provide a starting point for identification of hot spots within the drainage system that would need further investigation. In 2013, the city hired Lockwood, Andrews & Newnam Inc. (LAN), a national civil engineering firm based in Houston, to study the Covington Woods region as a whole, including its interaction with other interconnecting drainage systems, and recommend future drainage improvements.

“Previous studies and improvements within the Covington Woods region studied selected portions of the region or attempted to address sub‐regional issues,” said Chris Steubing, P.E., C.F.M., assistant city manager at City of Sugar Land. “Through this study, we wanted a comprehensive understanding of the limitations and deficiencies of the various drainage systems, and to determine region-wide improvements that are efficient, cost-effective and support the MDP.” 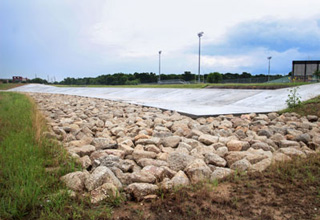