In a region known for its reliance on automobiles, Dallas Area Rapid Transit (DART) has implemented one of the largest and fastest-growing public transit systems in the country. Combining vision and prudence, the agency has built a network of bus, light rail and commuter rail services encompassing 13 cities during the past four decades. With Dallas-Fort Worth growing exponentially, DART leaders identified a series of capital projects to improve the agency’s ability to move more trains and people – especially in downtown Dallas where all four light-rail lines converge.

One of the capital projects is the extension and modification of the platforms at DART’s Red and Blue Line stations. Currently, the Red and Blue lines are limited to two-car trains due to platform lengths at 21 of 28 existing stations. These stops were built prior to 2004. All other stops were either built with three-car trains in mind or have already been updated. By expanding the platforms at these stations, three-car trains can be operated system-wide.

At the seven remaining stations, which were originally constructed to accommodate the additional car, a third special use raised platform area will be built per American with Disability Act (ADA) standards. The existing special use raised platform areas will be relocated to allow for level boarding. Construction of the $128-million project, which is funded through a combination of federal grants, state grants and local transit sales taxes, began in summer 2019. DART estimates that when the project is completed in 2022, capacity on the light-rail system will increase by 33 percent.

“As our regular DART riders know, the platforms and trains on our Red and Blue light-rail lines can fill up very quickly, especially during peak travel times,” said John Rhone, DART vice president of capital design and construction. “Through our platform extension project, we can provide our riders with greater capacity and comfort, ensuring all North Texas residents have access to the mobility opportunities they need to get to jobs, school and health care.” 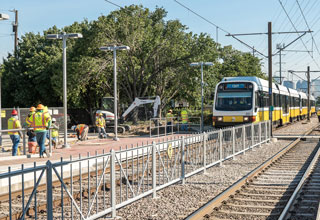