Houston’s new Northeast Transmission Water Line will bring an additional 96 million gallons per day (mgd) of water to the city, plus 269 mgd to local water authorities. Construction is anticipated to start later this year, with the first in a series of segments set to be up for proposals next month. With a maximum diameter of 120 in., the line will be the largest to be built in the city, says Venus Price, supervising engineer for the Houston’s Dept. of Public Works and Engineering.

This $450-million, 16.5-mile project comprises 13 segments, 11 segments of which include large, 108-in.- to 120-in.-dia pipe. The entire project, including two interconnections, will be constructed in three phases. The line is being built as part of the city’s Surface Water Transmission Program (SWTP) to meet the region’s projected 2040 water demand.

“The [108-in.] first project, for which we hope to get proposals on March 2, is about $28 million, and the [54-in. interconnection], for which we’ll get proposals in the middle of March, is about $12 million in construction costs,” Price says. “The award process for these projects is competitive sealed proposal, or CSP.”

Up third is a second 108-in. line, which will be about $20 million. “That’s not going to advertise until the middle of March, so we’re not expecting to get proposals for that one until April,” Price notes. 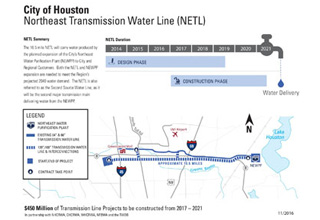