Most public transit fleets don’t include ferries, but some do. They’re a much cheaper way to move people, cars, and cargo across a body of water than building a bridge or tunnel.

Because it’s often featured in movies, the most famous is the New York City DOT’s 5-mile route between the boroughs of Manhattan and Staten Island. Running the service 24 hours a day seven days a week requires eight ferries. Halfway across the country, though, Texas DOT (TxDOT) has provided a similar service for almost as long. And, unlike the Staten Island Ferry, its ferries carry cars as well as people.

Since 1929, the TxDOT’s Houston District has provided free ferry service to and from unincorporated Port Bolivar and Galveston Island, a resort city that’s home to almost 50,000 people. At just under 20 minutes, the 2.7-mile trip saves motorists more than an hour of travel through Baytown and other communities north of Galveston Bay along the TX-146 highway. The ferry is the only way to cross the bay.

The entire area’s in a vulnerable location on the Gulf of Mexico, making the ferries critical to emergency response. Each carries about 500 passengers, 70 vehicles, and six crew members. When a hurricane threatens, the ferries are the fastest way island residents can flee to the mainland. 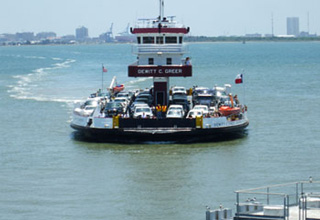