By Justin Reeves and Philip Wheat

There’s a theory popular on the internet today that the earth is flat. They’re called “flat-earthers.” You would be hard-pressed to convince a utility designer that the earth is flat. In addition to the spherical globe, the topography of the land throughout the state, while visually appealing, often conflicts with the necessary alignment of underground utilities. Therefore, an aerial crossing sometimes becomes necessary. 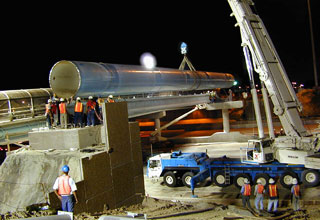