By Jeremy Nakashima and Jim Holzapfel

The Winter Storm Uri devastated Texas, leaving millions of people without electricity, heat and water for several days. The blackouts affected pump stations and caused low water pressure or outages in many areas of the state. Frozen pipes, sensors, filters and other components disrupted water treatment plants. Several cities urged residents to boil water before consumption. According to estimates, more than 10 percent of the approximately 7,000 different water systems statewide failed. In some places, generator failures at lift stations created sewage backups at homes.

As Texans take stock of the damage, water and wastewater utilities are asking one question: How can we prepare for a future event? In northern states like Illinois, where we live, utilities routinely prepare for winter storms as a matter of necessity. Many mitigation measures implemented are simple, practical and inexpensive. Some of the measures that Texas, or any state not as prepared for winter storms, can borrow from northern utilities include:

Find the Weakest Link
If a pressure transducer that senses the water level in a tank freezes, it can shut down the entire plant. When reviewing facilities, find the weakest link in the whole system and perform a risk assessment. For exposed small diameter lines, heat trace and insulate the pipe. Many northern treatment plants and pumping facilities use heat tracing to avoid freezing in the winter months. For exposed large-diameter pipes, insulate and keep water moving through it.

Alternate and Cycle Pumps
Most plants are designed with redundant pumps where a spare pump is called to run only if one of the other pumps is out of service. One of the operational changes that utilities can make prior to a projected cold snap is to cycle pumps on a set timed interval, alternating pumps after each run period to ensure warmer water is circulating through each pump and connected piping. The warm water flowing through the piping system will prevent freezing provided the cycle times are not too long. 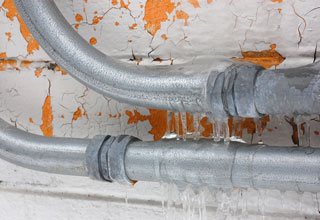